Leopoldo A Cook and Antonorsi

Those who know the Constitution for the Federation of the Earth know that there is a complete financial and economic policy, which is reflected in its text and in various world laws (numbers 22, 42 and others).

In summary, the Law of Promotion of Economic Equity (number 22), establishes a world standard of wages and salaries. The Net Gross Domestic Product is used, discounting the elements that destroy value. It is known that the Gross Domestic Product, which is currently used in the world, includes all the money circulating in the economy, even those aspects that do not contribute to well-being. For example, money spent on solving environmental problems, health resources to treat lung diseases caused by pollution, the prison system, etc. The Net Gross Domestic Product only takes into account the elements that contribute to social welfare.

The law establishes that each year this world production value is divided by the total hours worked on the planet to obtain the average world wage or income.

Likewise, it determines how to calculate the minimum wage so that "each full-time worker has a life that satisfies the basic needs of housing, clothing, free time, and adequate disposable income." The maximum salary is also estimated (it is desirable that it be a maximum of 4 times the minimum; perhaps in the first years the ratio is somewhat higher). Any income above the maximum allowed must, according to the World Constitution, be returned as tax, donated or reinvested. It is established as a measure of principle that equal work should correspond to the same salary. A fair salary scale is established, according to effort and responsibilities.

The world currency will be tied to that value, so it will not fluctuate, which will eliminate inflation.

The general objective is to increase both wages and quality of life, as well as reduce the working day and make it less intensive, thanks to technology.

Law 42, on the other hand, establishes the Universal Guaranteed Annual Income, a complementary element.

All this is already contemplated in the world laws approved by the Provisional World Parliament.

What follows is an additional proposal, made by me, to specify the quality of life of the various citizens in each of the regions of the planet.

Family income is not only given in money. Each region has different characteristics, but in all there are a series of goods and services that people receive in the form of partial or total subsidies, by the State or by the community itself, which are not measured in money, but which affect the quality of lifetime.

My proposal is to define in a qualitative and quantitative way what we understand by a dignified, full life, what has been called "good living", "living well", or "living fully", having all the elements that a family needs in food, housing and habitat, clothing, transportation, health and social security, education, culture, recreation, public services.

For example, in terms of diet, what type of food a person requires according to their age, work activity, climate, tastes, etc. This can be expressed in calories, supplemented by a list of foods, which can be expressed, region by region, district by district, according to customs and availability. The list remains more or less unchanged over time, and is adjusted in monetary terms according to inflation, to an international currency portfolio. In the case of the World Constitution, there is the world currency called “Hour”.

Also in health, for example. The average health services that a person should receive per year are determined: preventive visits, laboratory tests, exercises. Year to year can be expressed monetarily. Non-average elements (serious, catastrophic, degenerative diseases, etc.) would be left out of this study and will have a separate treatment, totally subsidized.

Every element of life must be considered. Not just food and health. Housing (properly furnished), ample access to public transport, culture and recreation. For example: annual vacation period in which the family can move to a place of recreation, considering the costs of transportation, food, accommodation, etc.

This is how you proceed with each good or service. The result will be a list of goods and services that can be monetarily valued in each region, in terms of local inflation. It is not a simple Basic Food Basket, but a Pantry of Life in Fullness that includes everything necessary, goods and services. Today's technology allows this to be done efficiently and easily.

The result will be that each average family in that region will require an amount of money per year to have a full life. That value, of course, will be the net one after subtracting the amount received by the family in terms of subsidies, including the Universal Guaranteed Annual Income. For example, in Venezuela there are important subsidies for food, health, education and housing, among others. To the money a family receives, a significant amount of subsidies would have to be added to determine the real amount of income.

It is expected that the minimum salary defined above (estimated at the family level), plus the subsidies received, will be equal to or greater than the Pantry for Full Life.

This may not always be achieved, for various reasons: some regions will not have reached the sufficient level of development, climatic conditions, etc., but both terms will have to be progressively equalized. The economy, directed by politics, which in turn is directed by ecology, under the primary spiritual guideline, will progressively evolve until reaching these levels. From there, it will acquire an approximately static, sustainable term, not one of constant growth, as occurs in currently dominant capitalism, with the consequent serious social and environmental imbalances.

What do you think? 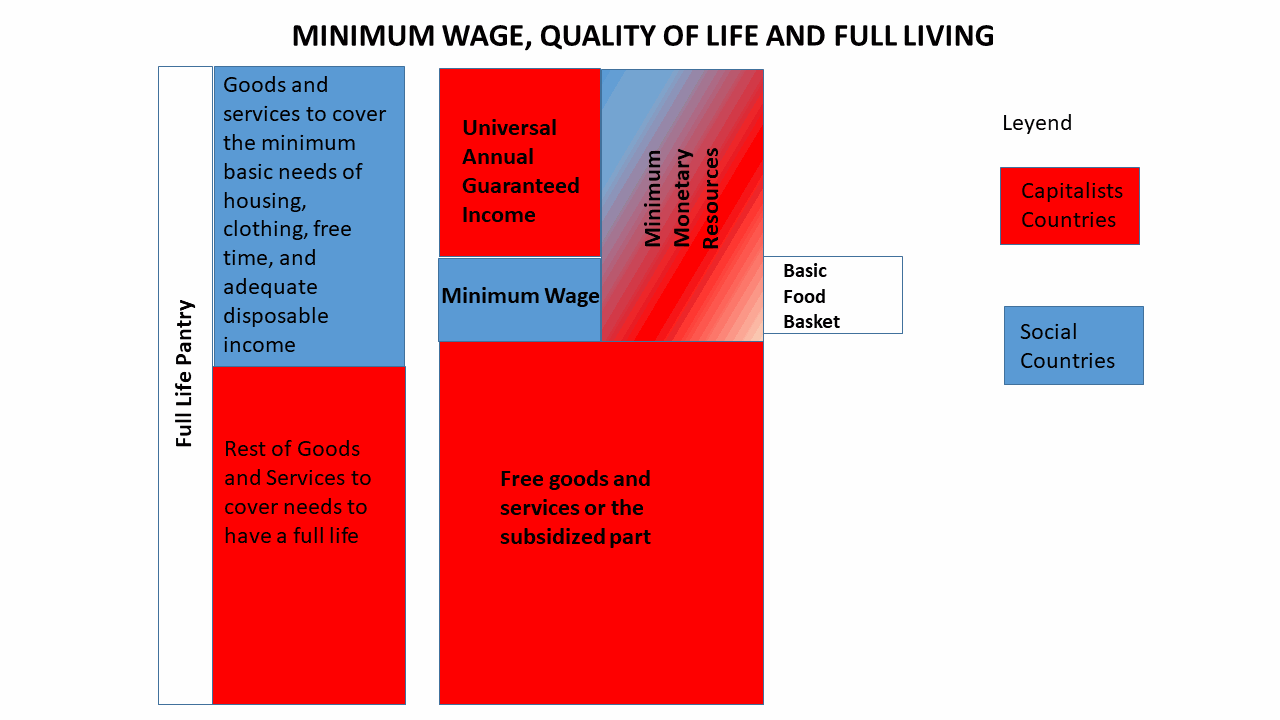